The 5 FSMO Roles in Active Directory: What They Are and What They Do

Active Directory (AD) is pretty much the go-to domain authentication services for enterprises all over the world and has been since its inception in Windows Server 2000.

Back then, AD was pretty unsecured and had some flaws that made it particularly difficult to use. For example, if you had multiple domain controllers (DCs), they would compete over permissions to make changes. This meant that you could be making changes and sometimes they simply wouldn’t go through.

What are FSMO roles in Active Directory

Over the last few decades, Microsoft has introduced numerous enhancements, patches, and updates that have drastically improved AD functionality, reliability, and security. One such change was to head towards a “single Master Model” for AD where one DC could make changes to the domain. The other DCs fulfilled automation requests.

However, people quickly realized that if the master DC goes down, no changes could be made at all until it was back up again. So, Microsoft had to rethink.

The solution they came up with was to separate the responsibilities of the DC into numerous roles. That way, if one of the DCs goes down, another can take over the missing role. This is known as Flexible Single Master Operation (also known as FSMO or FSMO Roles).

A full Active Directory system is split into five separate FSMO roles. Those 5 FSMO roles are as follows: 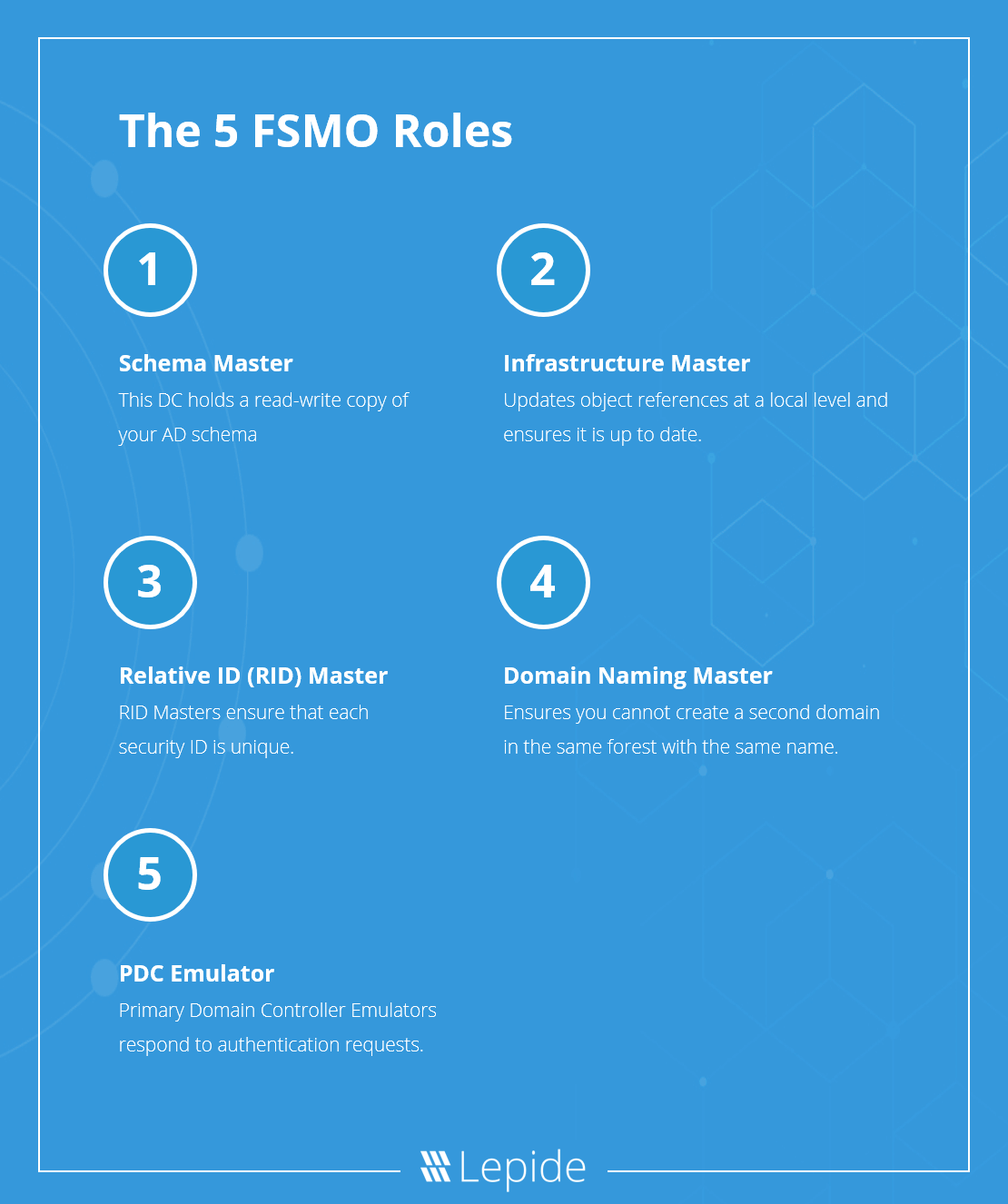 The 5 FSMO Roles in Active Directory[/caption]

If you want to create a security principle you are probably going to want to add access permissions to it. You can’t grant these permissions based on the name of a user or group because that can change. Instead, you associate them with a unique security ID (SID). Part of that unique identifier is known as the relative ID (RID). To prevent two objects having the same SID, a RID Master processes RID pool requests from DCs within a single domain and ensures that each SID is unique.

This is the most authoritative DC in the domain. The role of this DC is to respond to authentication requests, managed password changes and manages Group Policy Objects (GPO). Users cannot even change their passwords without the approval of the PDC Emulator. It’s a powerful position!

This controller understands the overall IT infrastructure in the organization, including what objects are present. The infrastructure master updates object references at a local level and also makes sure that it is up to date in the copies of other domains. It does this through unique identifiers, such as SIDs.

This DC simply ensures that you are not able to create a second domain in the same forest with the same name.

This DC holds a read-write copy of your AD schema. Schema is essentially all the attributes associated with an object (passwords, roles, designations, etc.). So, if you need to change a role on a user object, you’ll have to do it through the Schema Master.

The 5 FSMO Roles are critically important as they go hand in hand with the security of your Active Directory. The domain controllers, therefore, need to be online at the time the services are needed. Thankfully, depending on the FSMO role, this may not be all that often. For schema master, for example, the DC only needs to be online during the update. The PDC, however, will need to be online and accessible at all time. For that reason, you need to make the necessary steps to ensure that the PDC emulator does not fall over.

If you find yourself in a scenario where one of the FSMO roles is unavailable (say, for example, the PDC emulator), you need to act quickly to get all your FSMO roles back up and running again. If you know that a particular FSMO role is going to undergo scheduled maintenance, you should transfer the FSMO role to a different DC. If the worst should occur, and your FSMO role crashes, you can always seize the FSMO role to another domain controller as a last resort.

It’s absolutely vital that you are proactively and continuously monitoring Active Directory changes in order to prevent insider threats, privilege abuse, and brute force attacks. Unsure about how to do this? Schedule a demo with one of our engineers today and see how Lepide Active Directory Auditor helps monitor and secure AD.

x
Or Deploy With Our Virtual Appliance

Danny brings over 10 years’ experience in the IT industry to our Leadership team. With award winning success in leading global Pre-Sales and Support teams, coupled with his knowledge and enthusiasm for IT Security solutions, he is here to ensure we deliver market leading products and support to our extensively growing customer base